He was born in 1683 in Baksafalva (today Mereni) in Transylvania. He went to the grammar school of the Order of Friars Minor Conventual in Târgu Secuiesc. He got acquainted with the Franciscan spirituality through his teachers and asked for his admission to the order, where he received the name of Didák. He went on to study at the university of the Conventual Franciscans in Prešov. He obtained a master's degree in Theology and took the perpetual vows in the order in 1704. In 1708 he was ordained priest. 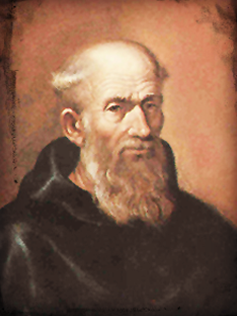 In 1710 his superiors sent him to Baia Mare and entrusted him with the direction of the convent of the town. During the war of independence led by Ferenc Rákóczi, the town was exposed to many trials; it was always besieged or occupied by one belligerent party or the other. The convent also burnt down, and when Fr Didák arrived there, he only found ruins, billeted soldiers, religious friars scattered over the town and the plague. He started his ministry as a religious priest among the sick. He nursed and consoled the plague-stricken sick, celebrated their funeral and begged money for them if needed. He united the religious friars of the town and managed to recover the order's convent. When he ceased to be the convent's superior, he asked for permission to visit the Catholic population of the villages around Satu Mare, who had received almost no spiritual attention during the war. The protestant inhabitants received him with hostility, but Fr Didák returned their hostility with kindness; he visited the poorest and sick people, thus he earned the sympathy of all.

Afterwards he went to Nyírbátor, where he reconstructed the convent and the church, and established a school and an educational institute next to them. Few people know that Fr Didák himself designed the beautiful altar of the Passion (also called Krucsay) of the church. He was elected provincial in 1717. He travelled around Szabolcs County and some parts of the neighbouring counties. He had churches built in Fehérgyarmat, Cheșereu, Csenger and Tarcea. As a result of his mediation, the faithful regained possession of the old Catholic churches of Carei and Nyírbakta. He reconstructed the church of Bistrița and invited the Conventual Franciscans to open convents in Cluj and Szeged.

In 1725, he made a journey in the valley of the River Sajó and was struck by not having found any Catholic church or priest in the area. He immediately asked for permission to open a convent of his order in Miskolc, which he received in 1729. On his following missionary journeys he visited the villages along the River Tisza. Fr Didák was untiring in preaching, explaining the Catechism and administering the sacraments. He often visited areas that were literally mission fields, since, due to the country's devastation by the Turks and the division of Hungary, there were several villages where the Gospel had not been proclaimed for two hundred years.

In 1739, when Fr Didák was visiting the villages of the Great Hungarian Plain, a new epidemic of plague broke out. He spent two years looking after the sick both in body and in spirit. That was his last missionary journey. His physical strength was ebbing away after thirty years of constant work, vigil, privation, and long and tiring walks. In April 1744 he managed to get out of his sickbed and preside over the provincial chapter gathered in Miskolc. However, at the end of the month, on 28 April, his strength was definitively exhausted and his earthy pilgrimage came to an end.

The biography of Fr Didák, who was considered a "holy man" already in his life, was written by one of his spiritual children, Klára Károlyi. The order insisted on his beatification since 1753, and the inquiry was started, but due to a series of obstacles the progress was very slow. Nevertheless, Fr Didák's veneration has survived all the storms of history and it has been supported both by his order and by all the Hungarian bishops since then. In 1974, during his stay at the Pázmáneum college, Cardinal Mindszenty asked Fr Vitale Bommarco for more information on his cause. The order's Minister General gave him a detailed explanation of the process since 1937. The validity of the diocesan inquiry was recognized by the Holy See on 15 June 1990.

O Holy Trinity, one God, glorify your name by the beatification of your faithful Servant Didák Kelemen, which we humbly pray for.
Through his heavenly intercession bless our everyday affairs and grant us your grace so that we may follow his example by having a living faith and turning with generous love towards our neighbours, and may we thus gain eternal happiness.
Through our Lord Jesus Christ.

Those who obtain favours through his intercession are asked to notify the
Office of the Archbishop of Eger
3300 Eger, Széchenyi u. 1.