He was born on 5 January 1781 in Gyöngyös, in a modest but large family. He was the second son of his deeply religious parents, who were craftsmen. He attended secondary school in Rožňava and then went on to study in the seminary of Eger. He was ordained priest on 1804. 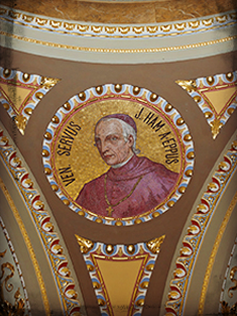 He started his priestly ministry as chaplain in Pásztó, then he became inspector of studies and professor of theology of the archiepiscopal seminary of Eger. In 1807 he was appointed head of the seminary. As canon of Eger, appointed in 1817, he established several social institutions, for example nursing homes for elderly and poor women, and he also set up a foundation for a boarding school.

On 25 May 1827, King Frances I of Hungary appointed him bishop of the diocese of Satu Mare. In January 1828, Pope Leo XII confirmed his appointment, and he was ordained bishop on 16 March 1828 in Eger. His inaugural took place on 15 April in Satu Mare. His spirituality, centred on prayer, made a great impact on the life of piety of the diocese. Several acts of piety, introduced by him, became traditions in the diocese: for example, the children's first holy communion on the fourth Sunday of Easter or the holy rosary said in the churches. He started the tradition of organizing spiritual exercises on the first three days of the Holy Week, at which he participated together with the priests of the office of the diocese. In Lent, the faithful prayed the way of the cross every Friday in the church of the Calvary. On Sunday afternoons there was adoration of the Blessed Sacrament and prayer in the cathedral, most of the time led by the bishop himself.

During his thirty years as bishop, he built nine parish churches, reconstructed thirteen and set up or restructured nineteen (new) parishes. In 1833 he invited the Brothers Hospitallers to Satu Mare, and constructed a convent and a hospital for them. In 1842, he founded the Congregation of the Sisters of Charity of Saint Vincent of Satu Mare, whose objective was the education of women and practising the works of mercy (both spiritual and physical) in hospitals, social institutions and in all the places where poor, abandoned and sick people could be found. He wrote his circular letters in three languages (Hungarian, German and Slovakian) according to the needs of the population and in order to give good example.

On 25 June 1848, at the proposal of the Hungarian government, Ferdinand V appointed him archbishop of Esztergom and prince primate of Hungary. The Holy See did not confirm his appointment due to concerns raised by the Viennese government (that is, the bishop's old age), thus he decided not to take any measures that belonged to the competence of the primate. However, Pope Pius IX manifested his confidence by appointing him his representative for the national synod, which did not take place due to the historical circumstances.

On 4 October 1848, the bishops' conference addressed a circular letter to the faithful exhorting them to defend the country and obey their superiors. Bishop Hám took part in drafting the bishops' conference's official letter to the king, with which they wished to mediate between the opposing parties in order to re-establish peace. On 5 January 1849 János Hám exhorted, on behalf of the bishops' conference, the Catholic faithful to be loyal to Franz Joseph and obey the imperial troops. Therefore, the Hungarian authorities declared him a traitor and seized his possessions. In the spring he was constrained to flee from the advancing Hungarian troops. On 12 July 1849 the council of ministers of Austria issued a decree announcing that the archiepiscopal seat of Esztergom was about to become vacant, and archbishop János Hám was called upon to resign.

On 14 July 1849 he renounced his office and returned to his diocese. In 1851 he invited the Jesuits to Satu Mare because he wanted to entrust them with the running of a boarding school for boys. In 1856 he invited the Franciscans and entrusted them with the education and schooling of the children of the workmen of the brick-works situated on the periphery of the town.

Bishop János Hám passed away on 30 December 1857 and was buried in the cathedral of Satu Mare. His contemporaries, both churchmen and lay people, considered him a saint when he was still alive, and attributed the healing of several seriously ill people to his intercession. His process of beatification was initiated by diocesan bishop Gyula Meszlényi in the 19th century, and all his successors had it at their heart. However, due to the difficult historical circumstances the process advanced very slowly. Bishop Pál Reizer took important steps, and in 2013 the diocesan inquiry was finally taken up again, at the insistence of Bishop Jenő Schönberger.

With infinite paternal love you gave us Bishop János Hám, who was your faithful servant and good pastor of your flock, and who, through the way he strove for holiness, continues to encourage us to follow your only Son.
Look upon his merits and his holiness, and through his intercession grant us that we may soon honour him among your saints.

Those who obtain favours through his intercession are asked to notify the
Diocesan Authority of Satu Mare
RO-440010 Satu Mare, Str. 1 decembrie 1918 nr. 2.