István Kaszap was born on 25 March 1916 in Székesfehérvár, in a deeply religious family. He had four siblings. He attended the local grammar school led by Cistercian monks. His fellow students remembered him as a helpful, kind, delicate boy with a clean heart. During the spiritual retreat of his last year of secondary school, he decided to become a Jesuit. 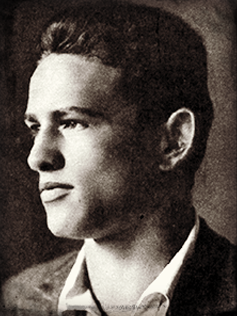 He was attracted by the way Jesuits lived poverty and by their burning zeal for Christ's kingdom. He entered the novitiate in Buda in the summer of 1934, and began his religious life with complete dedication. In December, however, he contracted a viral infection with high temperature and abscesses on his whole body. In March, he was taken to hospital in a critical condition and had to undergo a serious operation. The treatment of the wounds caused him great pain, but he bore it with heroic patience, which impressed everyone. In July he could return to the novitiate, but the wounds reappeared, and, however sad he was, the master of novices had no other option than sending him home to his parents with the promise that he could come back as soon as he was completely cured.

At home he got so much better that he had his purulent tonsils removed, hoping that this would eliminate the cause of his illness. However, shortly after the operation a tumour was found in his throat. He was taken to the local hospital, where he had to undergo a laryngotomy. But even so, he could not breath. He wished to talk to a priest, but when the priest arrived he was already unconscious. He left a short letter addressed to his parents on his bedside table, in which he bid farewell to his earthy life: "Good bye! We shall meet up there. Don't cry because this is my birthday in Heaven. May God bless you." He passed away on 17 December 1935.

After his death, his fame of sanctity spread immediately, his tomb became a place of pilgrimage and many favours were attributed to him. His process of beatification was initiated in 1941, and the Latin translation of the gathered documents was submitted to the competent congregation in 1947. In Autumn 1948 Cardinal Mindszenty, along with several bishops, visited the tomb of István Kaszap. In 1949, the State Protection Authority seized the building of the secretariat of the Kaszap cause and burnt the majority of the documents, which included more than 20,000 favours attributed to his intercession. However, his memory and veneration live on. In 1984, on the occasion of the 50th anniversary of his entering the order, the Jesuits who had been his companions in the novitiate celebrated a mass in the Church of Ottokár Prohászka in Székesfehérvár. His process of beatification was taken up again in 1990.

O good Jesus, you said that "whoever wishes to come after me must take up his cross, and follow me".
Look upon your faithful servant István Kaszap and through his intercession grant us the grace that we ask of you, provided it is for our good.
We pray that you grant us the grace to follow his example by faithfully serving the Seat of Love, your Most Sacred Heart.