Father Marcell (born Boldizsár Marton) was born on 9 September 1887 in the village of Zalakomár. He attended grammar school in Keszthely and Trnava, and during those years he became aware of God's love for the first time. During his university years, he was unable to resist the fashionable ideologies of the time, as a result of which he lost his faith and stopped to receive the sacraments for many years. 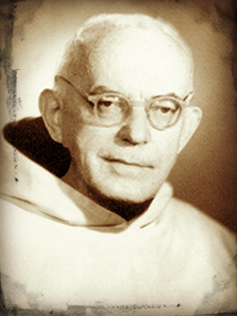 He received a teacher's degree in Hungarian, Latin and Greek languages and started to teach in Petroșani. Later he became a teacher in Zalaegerszeg, in the same grammar school where József Mindszenty was the teacher of religion. Their long and deep friendship dated back to this period.

During World War I, he volunteered for service in the field instead of one of his younger colleagues who had two children. After the war he went through a long process of conversion, at the end of which, thanks to grace of the Divine Providence and of Our Lady, he became a practising Christian and a man with a deep interior life who was striving for holiness. He realized that he had a religious vocation and asked for admission to the Order of Discalced Carmelites in 1925. He was ordained priest in 1930. His superiors sent him to the novitiate in Győr, where he was master of novices for thirteen years. He educated the novices with his personal example and with true paternal love. He was transferred to Budapest in 1943, and by the second half of the 40s he had become a well-known preacher and confessor in the whole country. His spiritual children included the bishop of Győr Blessed Vilmos Apor and his old friend József Mindszenty, prince primate of Hungary. During the Cardinal's stay at the American embassy, Father Marcell was his confessor. The spiritual retreat that he preached in 1933 or 1934 in Székesfehérvár made a great impression on István Kaszap, who was still at secondary school.

He became the confessor of Budapest; those who wanted high-level spiritual direction were willing to wait hours in the queue to find consolation with Father Marcell. The well-known priest was considered a saint by his friends, spiritual children and all those who heard him preach. His superiors and fellow friars asked him to put in writing his work entitled "A Convent School on Mount Carmel" (Kolostori iskola a Kármelen), which was a description of his spiritual life, of the deep sense of prayer, which he also taught to his novices. He also put in writing the story of his vocation, which reflects his profound devotion to Our Lady throughout his whole life. His writings and poems give us a glimpse into the depth of his spiritual life; and all his words and his behaviour irradiate a contemplative spirit. He always transmitted serenity and joy, even in his illness.

In 1950, after the dissolution of religious orders, Father Marcell abandoned himself to the Divine Providence and lived as a witness of God's love. The spies of the atheistic regime tailed him and he was not allowed to hear confessions publicly. Nevertheless, his living faith, his unshakeable hope and his unlimited confidence in Our Lady gave support and spiritual consolation to many people who were persecuted for their faith. He accepted his serious illness and the physical suffering as coming from God. He passed away on 29 May 1966. His body was taken to Győr and buried in the Carmelite church. Since 18 August 2007 his tomb has been in the Carmelite church of Budapest.

In 1973, Cardinal József Mindszenty addressed an official letter to the general chapter of the Carmelite order asking for the extraordinary initiation of Father Marcell's process of beatification, since the rules of the ordinary procedure did not enable for its initiation in Hungary. The superiors of the order gave their permission for its initiation in 1975, however, the testimonies had to be gathered in secret. The superiors of the Hungarian province could only decide to initiate the process in 1990.

Heavenly Father, you have hidden the mysteries of your kingdom from the wise and learned, and revealed them to the little.
You have made wonders in the life of Father Marcell of Our Lady of Mount Carmel.
He firmly believed in your love revealed in Jesus Christ, he experienced it in the effusion of the Holy Spirit and he completely abandoned himself to you through the Blessed Virgin Mary, the Mother of Fair Love.
Thus, amidst the vicissitudes of life, he became a witness of hope and a proclaimer of your love, who loved everyone without exception.
We ask you to glorify him also on the earth and reveal in him the power of your love and the greatness of your mercy.
Through his intercession grant us all the graces that we humbly ask you according to your will.