She was born in Melenci (Torontal County) on 15 December 1905 and was baptised Etelka. Her father was on official and her mother worked at home, looking after their six children. The family was deeply Catholic. At the age of nine, Etelka came down with scarlet fever, as a result of which she had a hip-bone inflammation and was constrained to bed for ten months. 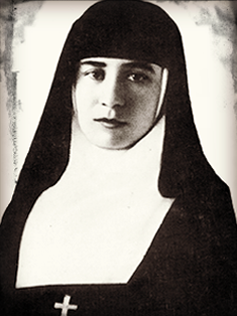 Even in the seven following years she was only able to walk with the help of a walker, and her right leg remained rigid for all her life. However, not even the illness could suppress her constant joy and kindness; she always coped with the difficulties without complaint and with great patience. After finishing the elementary school, she went on to study in the secondary school of Veliki Bečkerek, and then she did a commercial course.

In her teens, her spiritual life was not especially deep, but the reception of the sacrament of confirmation on 1 June 1923, at the age of eighteen, was a turning point in her life. From then on, she spent more time in prayer, always went to confession with the same priest and did her spiritual exercises with a lot of devotion. She turned ever more towards God and got to know herself better: she became aware of her defects and weaknesses. Urged by the love for Christ, she took one temporary and two perpetual vows ( of chastity and perfection) in May 1926. From that day on, all her actions were inspired by the desire to keep her vows and to remain always faithful to Jesus. Her motto was: Semper fidelis.

She was deeply impressed by the biography of Saint Therese of Lisieux, who was canonized in 1925, and she decided to place the Eucharistic Jesus in the centre of her spiritual life. She wished to be cured in order to enter a religious order, and the acceptance of her physical weakness required a long interior struggle. Her vows helped her along her way: she embraced the Cross and only asked for strength. Her spiritual father, P. Elemér Csávossy, a Jesuit priest, saw her unfolding vocation and recommended Etelka to the Congregation of Jesus of Pest despite her physical weakness. The meeting with the mother superior was successful, but the medical examination found that she was unfit for religious life. The refusal hurt her a lot, but her confidence in Christ did not slacken. She started a novena to Saint Therese of Lisieux, at the end of which she had a miraculous dream that confirmed her vocation of self-giving to God. Her hopes were fulfilled in the summer of 1927, when she was informed of her admission to the convent of the Visitation Sisters in Thurnfeld. Her letters written to her mother reflect her unfailing joy, however, some words of her diary also reveal the numerous difficulties and struggles.

She took the habit on 10 April 1928 and received the name of Mária Margit in honour of Saint Margaret Mary Alacoque. A few months later, in August 1928, she returned to Hungary with some of her companions in order to establish the Order of the Visitation of Holy Mary there too. Their first house was in Érd. They also set up an educational institute next to the convent, where Mária Margit taught French and shorthand writing.

She took her perpetual vows on 16 May 1932, on Pentecost Monday. She took the last notes of her diary on that day: "My God and my all!". From then on, her health began to deteriorate rapidly: she came down with an illness of the lungs. A long period of suffering was ahead of her, however, she faced it with the same joy and patience as all the previous difficulties. She prepared her mother and the rest of her family for the forthcoming separation. As she wished, she celebrated the first anniversary of her perpetual vows in Heaven: she passed away on 13 May 1933.

At first, she was buried right next to the convent. At that time, already, several people received favours through her intercession, and many people visited her tomb to ask her for help. Her tomb was later moved to the garden of the Church of Saint Michael in Érd-Óváros. In 1937, the bishop of Székesfehérvár Lajos Shvoy took the first steps to initiate her process of beatification: the favours attributed to her intercession were gathered, prayers were distributed and calendars featuring her photo were published. However, World War II and the decades of religious persecution brought her process to a standstill.

It was Bishop Antal Spányi who insisted on continuing the process: in 2005 he appointed the historical committee, the Positio was drawn up in Rome and a miraculous healing took place in Poland. A sign of Sister Mária Margit's veneration is the decades-long tradition of a holy mass celebrated on the anniversary of her death in the parish church of Érd: every year the church is full of the faithful who pray together for her beatification.

Inquiry of the Holy See (CCS)

Let us pray for her beatification!

O God, you exalt the humble and love the ones who love you, look with favour on the humility and love of Mária Margit, and grant us that we may soon honour her on our altars as a model of charity and fidelity.
Through her, I present my petition to you.
I ask you to show us that her intercession is dear to you.