He was born on 17 August 1887 in the Castle of Persenbeug, Austria. His deeply religious mother played the most decisive role in his education. Among his carefully selected teachers, János Tormássy and his son Artúr taught him the Hungarian language and literature. Charles approached the Hungarian-related subjects with enthusiasm; he spoke Hungarian just as well as he spoke German, his mother tongue. He attended the grammar school of the Benedictines in Vienna, and, later on, he studied law and canon law at the universities of Vienna and Prague. 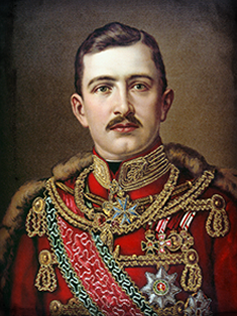 On 21 October 1911 he contracted sacramental marriage, out of love, with the Servant of God, Zita of Bourbon-Parma. They had eight children. Their family life was unique and exemplary in their social circles. Charles and his wife were against the war right from its beginning, however, he strove to fulfil his military service in a Christian way. He always preserved the pleasant memory of the Hungarian soldiers' companionship that he experienced as commanding officer of the 39th regiment of Debrecen. His personal experience strengthened his love for the Hungarians.

Without wishing for it, on 21 November 1916 Charles became king and emperor of the Austro-Hungarian Monarchy following the death of four heirs to the throne, as he was preceded by four relatives in the line of succession. This was a truly providential succession. He inherited the burden of a hopeless war, an obsolete political system and constantly worsening internal and exterior problems. The new king had a virtuous and rich personality completed with the enthusiasm of the youth. King Charles was the only supporter of Pope Benedict XV's efforts to bring about peace, thus he made every effort to finish the war. However, his most noble efforts were accompanied by fatal misinterpretations.

His coronation as king of Hungary took place on 30 December 1916 in the Crowning Church of Our Lady, in Budapest, and the ceremony played an important role in his path towards sanctity. It reinforced his awareness of his mission as king, his spirit of sacrifice and his willingness to offer his young life for his beloved nations in expiation. Charles took the Latin prayers of the coronation seriously: "Gird your thigh with your sword, mighty one, and take note that the righteous conquer their kingdoms not with the sword but by faith." "Receive the crown of the king in the name of the Father, and of the Son, and of the Holy Spirit. May you understand it to signify the glory of holiness, honour and the work of bravery, and may you know that through it you are a participant in our ministry, so that, as we are understood to be pastors in interior matters and the guiders of souls, so you in external matters may assist us as a worshipper of God and a strenuous defender of the Church of Christ against all adversity; and that you may always serve as a useful governor and a profitable ruler so that, adorned with the jewels of virtue among the glorious heroes, and crowned with the prize of eternal happiness, you may glory for ever with our Redeemer and Saviour Jesus Christ. Amen."

On 11 November 1918 he relinquished every participation in the administration of the Austrian State and on 13 November 1918 he did the same regarding the Hungarian State. However, he was not willing to abdicate; having received his responsibility as king from God, he could not imagine such an action. Regarding his failed attempts to reclaim the throne of Hungary on 5 April and 20 October–1 November 1921, he wrote to the Holy Father as follows: "I decided to go to Hungary and put an end to the internal strife with my presence, not led by ambition but guided by my duties that bind me as crowned king and are more sacred to me than my rights."

After much tribulation, Charles was exiled first to Switzerland, on 24 March 1919, then to the island of Madeira, after his return attempt of 1 November 1921. He never lost his living faith, piety and love for his family, and he offered his sufferings for his peoples. He passed away on 1 April 1922 due to a sudden illness. His tomb in Madeira has become a destination of pilgrims, who remember him as a holy hermit, father of a family and an expiating king. His fame of sanctity and his veneration are promoted by the League of Prayers for Emperor Karl, spread throughout the world.

Blessed Charles IV completed the line of holy Hungarian kings, begun by Saint Stephen. We can be rightly proud of them in Hungary, in Europe and in the whole world, and they can be our worthy intercessors in Heaven.

O God, through the adversities of this world You led Blessed Karl from this earthly realm to the crown reserved for him in heaven.
Grant through his intercession that we may so serve Your Son and our brothers and sisters that we may become worthy of eternal life.
Grant this through our Lord Jesus Christ, your Son, who lives and reigns with you and the Holy Spirit, one God, for ever and ever.