Almighty God, you chose Cardinal József Mindszenty to be a faithful bishop and pastor till his death in times of persecution, and a living testimony of truth and charity.

On 1 October 1973, Gyula Eöry, hiding behind the altar, took a photo of the Cardinal in the pilgrims' chapel entrusted to the Basilian Greek Catholic monks in Máriapócs, Matawan (United States). This icon-like photo served as the basis for many different prayer cards, printed copies and paintings.

First it was Father Julián Füzér who in 1977 asked painter Béla Schmidt to do this large oil painting, which he later gave to the Mindszenty Museum in Mariazell. This picture imbued with emotion and deep spirituality has become the Cardinal's most widely known portrait as a prelate and it has inspired numerous new works of art. 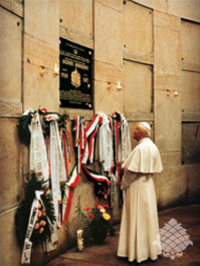 "In Esztergom, at the beginning of my visit, I especially wish to evoke the memory of the beloved and highly respected prelate, Cardinal József Mindszenty, who left us the radiant testimony of fidelity to Christ and his Church and of love for one's country. We will always bless his name." (Pope Saint John Paul II)

"The splendid testimony of Cardinal Mindszenty's loyalty to the Church was combined with lots of suffering. The unyielding cardinal and archbishop of Esztergom gave an example of noble virtues to the Catholic world. He wore the crown of thorns with the dignity of an outstanding pastor, and he left us with the memory of a noble ecclesiastical figure who could pray and suffer for his people for long years. With such spirit did he write to Pope Paul VI when he left his beloved Hungary: 'I humbly place this sacrifice at the feet of Your Holiness, convinced that even the greatest suffering becomes small when it serves God and the good of the Church.'

Today I wish to express my veneration for this great priest, bishop and primate of the Hungarian Church, on behalf of the Church to which he was so splendidly faithful." (Pope Saint John Paul II)

"The person and the testimony of József Mindszenty was always supported by the benevolent authority of the Bishop of Rome. And as he turned his eyes towards the rock of the Church and drew strength from it in his custody, sufferings and the darkness surrounding him, so did the successors of Peter look at him with respect and affection as a living and outstanding witness to the invincible strength of the Gospel." (Pope Saint John Paul II)

26 February 1993 The Archbishop of Vienna transferred his competence regarding the process of canonization to be initiated to the Primate-Archbishop of Esztergom.

8 May 1993 The first national Mindszenty pilgrimage, organized since then in Esztergom by the Hungarian Church every year on a day close to the day of the Cardinal's death

15 June 1993 The Holy See issued the statement of "Nihil obstat" indicating that nothing had been found that could exclude the possibility of initiating the process of canonization.

16 December 1993 The Hungarian Catholic Bishops' Conference considered it opportune to initiate the process of canonization and gave its unanimous support for it.

19 March 1994 The process of canonization was opened in the Central Seminary in Budapest.

4 January 1996 The theological censors declared that the writings of Cardinal Mindszenty did not contain anything contrary to the Faith and good morals of the Catholic Church, and the historical consultors systematized and evaluated the gathered sources and formed their opinion of the person of the Cardinal and his role in history.

2 July 1996 The documentation was finalized.

22 October 1996 The documentation was officially handed over to the competent authority in Rome.

9 November 1999 The Congregation for the Causes of Saints recognized the authenticity of the documentation and the fact that the diocesan inquiry had been carried out properly and in compliance with the Church regulations.

10 November 1999 The examination of a supposedly miraculous healing attributed to the intercession of József Mindszenty was started.

16 November 2000 The diocesan inquiry into the miraculous healing was closed (the documentation can only be evaluated in Rome after the recognition of the Cardinal's holiness).

2005 With the aim of promoting the process of canonization of the Servant of God József Mindszenty, the Hungarian Catholic Bishops' Conference established a joinder of parties with the Mindszenty Foundation, promoter of the cause.

2007 The person currently responsible for the process in Rome, Father Vincenzo Criscuolo OFM was appointed as Relator of the cause. The elaboration of the Position was started.

2012 The Permanent Commission of the Hungarian Catholic Bishops' Conference officially confirmed its petition for the beatification and canonization of the Cardinal.

The Servant of God József Mindszenty was courageous, outspoken, even fearless, as Pope Paul VI said of him after his death. He dearly loved his Church and his country. He defended his people; he defended the faith and humaneness in a period in which overwhelming historical forces were destroying the country and the world. He radiated the power of truth. 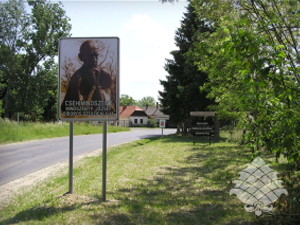 Even today, his figure and his veneration affect the depth of our souls. His process of beatification has been under way in Rome for years. In 2006, the Conference of Bishops joined the cause: now we also officially petition his beatification and canonization. We do so because we consider him a saint.

We cannot simply consider him a politician. Although he often talked about issues that were pushed into the political spotlight, his personal standpoints derived from his Catholic faith. When he raised his voice against racism and the persecution of Jews, when he demanded – naively, according to some, but as a prophet – that the Nazis and the Arrow Cross party give up Western Hungary without fighting and not continue the pointless destruction, he was not using tactics. His whole life was characterised by his unyielding loyalty to truth, regardless of political regimes. He defended man as God's image, along with human life and the eternal truth of the commandment: "Thou shalt not kill". When he raised his voice against the forced removal of Swabians and against the expulsion of Hungarians from Czechoslovakia after World War II, he was led by the same religious conviction. He was led by his concern for his people and his Church when he resisted the anti-religious and anti-cultural pressure of the Stalinist dictatorship.

His figure became a symbol: the symbol of the Hungarian Catholic community and of the entire tormented and oppressed Hungarian nation. In the prison, the communists wanted to break Cardinal Mindszenty both spiritually and physically. Nevertheless, in 1956 he was released indeed.

Let us bow low before his greatness. Our celebration will be worthy of him if we continue to respect the whole truth of our history, if we look upon man and the world in the light of Christ. If we do not look at our past and our present with the bias of an interest group but with the courage of charity that is willing to accept and to become reconciled with everyone. If we refuse all the forms of racism and hatred motivated by ethnic reasons with the resolution coming from our faith. If we love our people but at the same time appreciate God's image in everyone else and the wisdom of the Creator in creating different cultures.

In the first place, he was a man of faith. He witnessed the suffering and resistance of other bishops, priests, religious and lay people. He could speak with affection and understanding even of those who were broken by the persecution. He was always obedient to the successor of Saint Peter, even when it made his soul suffer.

On the grave of Cardinal Mindszenty in Esztergom it reads: "Devictus vincit" - defeated, he is victorious. May the divine truth, which he wished to serve in his life, continue to be a source of life-giving force, spiritual renewal, reconciliation and confidence for all of us!