Grant him, O Lord, the Episcopal Chair, in order to guide thy Church and the people assigned to him. Mayst thou be his authority, his power and his constancy. Multiply thy blessing † and grace upon him.

(Part of the rite of episcopal ordination)

"I was once a rural chaplain and catechist, board member of the co-operative, teacher of religion in a grammar school and parish priest of the faithful living in the town and in villages. I know the ambitions and difficulties of my new priests. I want to work with you, as the first to start the work, and with the prayer and paternal affection that are essential for this job. My aim is to enable priests to work eagerly for their faithful and to perfect their own souls, so that they be priest in whom Jesus' Heart can take delight." (From Cardinal Mindszenty's inaugural speech)

"The figure of Saint Margaret of Hungary, with the lily and the missal, is part of my coat of arms because I came into contact with my diocese during the canonization of Saint Margaret, on the one hand, and because she evokes all the Hungarian saints and Veszprém's holy past, the holy Pannonia, Pannonia sacra, on the other hand." (József Mindszenty) 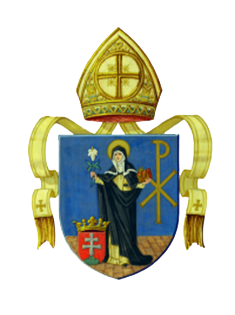 "Mindszenty's faith is dynamic also in his everyday life. He is a man of the people and has always remained close to them: he knows what hurts the ordinary people and says it explicitly. His faith is almost one with his humanity: a communion of life. Mindszenty is not a scientific researcher of God but a person who lives God. That is why he always finds the right words and themes to address his people. He preaches a sermon at least twice a day, and when he administers the sacrament of confirmation in two villages, he delivers the words of welcome at least 4 or 5 times and you can never see notes in his hands, he never repeats himself and it is impossible not to listen to what he says. Every day at 2 pm he finishes lunch and walks to the cemetery, located 1-2 km away, praying the rosary along with the people 'because not only you, the living belong to me but also your dead are mine'.

His monarchism is not a servile attachment to an obsolete and past regime out of some political or ecclesiastical interest but the claim of the handful of remaining Hungarians to legal continuity in the Carpathian Basin. Struggle, resistance and confession of the faith are his element. My heart, my mind and my life all draw me towards Mindszenty. There is no division in him. He is a person in whose life everything is in perfect unity. He himself fulfils and suffers what he demands of others. In my short life, I have never seen any person who, in his everyday life, loved Christ and his Church as much as him. He never flattered either his superiors or his subjects. I never see him rejoice over something wrong, not even when it is committed by his adversaries and he could take advantage of it. He is detached from money and the desire for possessions, and he only values material goods in as much as they can serve a good purpose. He leads a simple life without losing a noble and deep appreciation for what is good in the world. He prays a lot and works even more." (Testimony of Tibor Mészáros)

"In Zalaegerszeg, Mindszenty was a highly original pastor. He was original also as a prelate. He had an extremely fine pastoral sense. This comes out clearly in his circular letters, actions and measures. Guided by his pastoral sense, when the police arrested him in Veszprém, he put on his episcopal vestments and went to the police station on foot, surrounded by his priests and seminarists and giving his blessing to the people witnessing the scene, while the police, surprised and helpless, were accompanying the procession with embarrassment. Guided by his pastoral sense, he ordained his seminarists in the prison. 'It was quite a unique ordination! The ten seminarists to be ordained had one candle, one surplice and one chasuble but almost each of them had an armed ward.'" (Julián Füzér OFM) 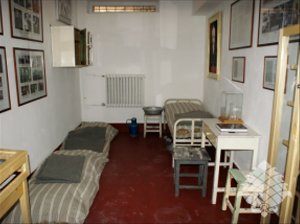 "My dear sons, let us now pray for those who threw us into prison." (József Mindszenty)

"My dear sons, we all had different plans for this Christmas. You thought of spending it in the silence of the Seminary while I planned to spend it with you, giving you presents. However, God wanted it otherwise. Today we share the poverty of the Child Jesus who came down to earth. Today we are more like him than ever. Our thoughts turn to our homes, and each of us sees his mother, parents, brothers and sisters or his dear relatives. I can also see my dear mother, who is now praying for his son and the sons of his son. Today she prays for us twofold." (József Mindszenty)

"The hour of darkness was descending upon Hungary. From the West the brown peril threatened us; and from the East, the red.

In 1944, Hungary was to provide the stage for the bloody drama to be played out by the cruelest rulers in history." (József Mindszenty)