Give him, O Lord, the keys of the kingdom of heaven, that he might not use for boastfulness that power which thou grantest for edification, and not for destruction. Whatever he shall bind upon the earth, may it be bound also in Heaven; and whatever he shall loose upon the earth, may it be loosed also in Heaven. Whose sins he shall retain, may they be retained; and whose sins he shall forgive, mayst thou forgive. Whoever shall curse him, may that one himself be accursed; and whoever shall bless him, may he be filled with blessings.

(Part of the rite of episcopal ordination)

"It is not for nothing that I brought the image of Saint Margaret in my coat of arms from Veszprém to the peak of Hungary's Mt Zion. May all the suffering, contrite Hungarians weave a wreath of the flowers of reparation, grown in a land soaked with sin and blood, around the glorious heavenly figure of Saint Margaret. Many things have passed but Christ is alive, he is victorious and he is King. The power of faith and prayer has not been defeated. Come, contrite and penitent Hungary, purging from your sins. Pannonia Sacra, come and redeem the sinful Hungary." (József Mindszenty)

Rome and my own country: those are my guiding stars. I would truly rejoice if we would all follow those stars, bringing new life to our Hungarian homeland and new life to our own souls." (From the inaugural speech of József Mindszenty as Archbishop of Esztergom)

In 1945, the Hungarian government serving communist objectives under Soviet influence started a deliberate and planned campaign against freedom of religion, faith and the Christian churches. The Conference of Bishops called the attention of the Catholic faithful to these sorrowful events for the first time on 18 October 1945, in its circular letter written on the occasion of the forthcoming elections:

"We are not meddling in the electoral campaign or taking a position in favour of any party; we simply explain the principles of truth and duty. It is not a democracy when the unlimited rule of a human person is replaced by that of another, nor when the egoistic and unbridled rule of a group of people is replaced by the similarly egoistic and unbridled tyranny of another group. We have to say it clearly that a Christian elector cannot vote for a political group that often and irresponsibly oppresses people, rules over them with violence and disregards the natural law."

"If certain people or groups of people, even representatives of the State violate or deprive others of their native rights such as the right to life, freedom of religion, freedom of work, right to subsistence, private property, etc. or their legally acquired rights, the Hungarian bishops will raise their voices in protest as it is their duty." (Hungarian Catholic Bishops' Conference) 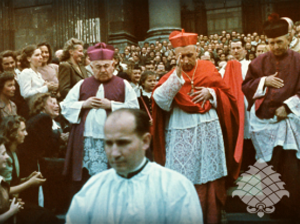 "Cardinal Mindszenty was a precursor of modern bishops. He received all his visitors with uncommon kindness and asked them to take a seat. He personally made all his important phone calls. He received any visitor immediately, if needed, and accepted many invitations to appear in public in order to be able to keep in direct contact with all the social strata. During his three years as archbishop, he almost travelled around the whole country. He had a huge audience. Some of his outspoken remarks spread from mouth to mouth. Mindszenty did not spare himself nor his delicate health. He held his speeches even when there were no loudspeakers and the only light was provided by candles." (Testimony of Béla Ispánki)

"I thought that God wanted me to act but now I can see that he wants to lead me along the path of suffering. His will be done!" (József Mindszenty)