One million Hungarians in prayer 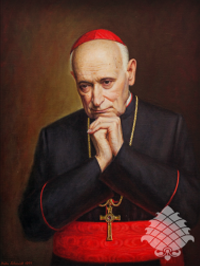 After the fall of communism, Cardinal Mindszenty's foundation launched a movement of prayer among Hungarians, thus following its Founder's will. The initiative was completed by the national year of expiation proclaimed for 2006 by the Hungarian Catholic Bishops' Conference. On 20 August, Cardinal Péter Erdő announced that the number of people praying for Hungary had reached and, what is more, significantly exceeded the one million mark: "As early as January hope flared up that Cardinal Mindszenty's dream of one million Hungarians in prayer would be fulfilled. My successor, this confessor of the faith, had expressed this great vision of his several times. Now I am glad to announce that the number of Hungarians in prayer has reached one million! Their commitments are deposited here in Saint Stephen's Basilica in sealed folders. Together they form a big image of king Saint Stephen offering the country to Our Lady. The more than one million Hungarians pray for the country both in Hungary and beyond the borders, even in the Western world. This way, together, there can be enough Hungarians in prayer. This way, together, we place our nation's future under the patronage of Our Lady, Queen of Hungary."

In his inaugural speech as archbishop, Cardinal Mindszenty said: "Let us become a people of prayer! Once we learn to pray again as our ancestors prayed, we will possess an inexhaustible source of strength and faith. I put my trust in the movement of prayer of millions of Hungarians and the rosary held ever tighter by my mother's hands. Do not give in to despair! Let us keep confessing our hope with resolution." ( 1)  In the circular letter on expiation, dated 11 February 1946, he wrote: "Let the expiation of Hungarians run through Hungary like a mighty cleansing river and its force, after having gained a hearing, eclipse all the waves of blood, tears and sin. May the offended God and man who offended Him be happily reconciled, may justice and peace kiss. What is our expiation for? For hearing God's voice saying to us: You are my people. And then we will answer: You are my God." (2) His life was the best example of expiation, and he used to say, "Our duty is to take the initiative and lead the way, not to be lagging behind." (3) In his circular letter written for Christmas 1946, he encouraged the faithful with the following words: "The entire land of Hungary has to be burning with the flame of prayer, faith and expiation. In this way we can outstrip profanities and the desecration of the day of the Lord, the mesh of denial of God, attacks against the Church, moral laxity, corruption and a series of violations of each of the Ten Commandments." (4)

Cardinal Mindszenty regarded as a sacred duty to deepen the spirit of prayer and reparation in his faithful: "My desire is one million Hungarian families falling on their knees and praying the rosary to Mary within and beyond the boundaries of Hungary. This force is more powerful than the one that had worked in the battles of Lepanto and Timisoara. It cannot hurt men but only serve them, their good and their sanctification."(5) His commitment was based on the ancient faith and deep convictions of Christianity that God is the ultimate lord and governor of history. Thus prayer and reparation ensure that - with the words of Scripture - where sin increases, grace shall abound all the more (cf. Rm 5:20). This was the foundation of his hope for Hungary's better future. If there are a million Hungarians in prayer, I will not fear for the future! (6)